No fewer than 389 police officers have lost their lives in the fight against Boko Haram insurgency in the northeast in the last eleven years.

The Borno State Commissioner of Police, Abdu Umar, disclosed this at the commissioning of a newly constructed police station and barracks at Beneshiek, the headquarters of Kaga LGA of the state.

According to Umar, over 450 policemen have sustained various degrees of injuries while battling terrorists at the frontlines.

He noted that the war against insurgency has also seen the destruction of over 30 police stations and formations with about 24 police barracks burnt.

“389 Policemen lost their lives, over 450 policemen were injured while several crime-fighting equipment were carted away or burnt.

“The losses suffered by Borno State Police Command attracted numerous interventions amongst which we are witnessing one of such interventions today,” he added.

The Commissioner of Police expressed his gratitude to the Borno state governor, Babagana Zulum, for reconstructing some of the security facilities that were affected by the Boko Haram insurgency.

Meanwhile, President Muhammadu Buhari has said that the country’s security situation has improved since he took over office in 2015. 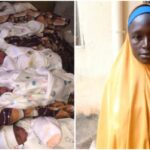