Nigerians have expressed anger after a soldier attached to a Chinese man was spotted in a market running errands.

The picture of the incident was shared by a concerned Nigerian with the Twitter handle, @NjokuLilian7, who described the scenario as shameful.

He explained that the Chinese man, who is likely an expatriate, was doing some shopping in the market and asked the soldier to take the items to the car.

“I saw a Nigerian soldier with an AK-47, following a Chinese (in a blue T-shirt) up and down in the market and doing the work of a maid. The Chinese buys and gives to the “maid” to carry behind him. The “maid” hurries to the car to offload and comes back to his “oga”. Shame!”

At press time, the picture of the soldier with his service rifle running errands for the Chinese national had over 3k retweets and over 5k likes.

@IamOkpashi said: @HQNigerianArmy and @NigeriaGov should look into the activities of these Chinese companies and the security men that are attached to them. Even the way these security men ‘deal’ with Nigerians working with these companies on the orders of the so-called masters.

@viga212 said: @HQNigerianArmy This is shameful and unprofessional.

However, the army is yet to make any official statement on the issue. 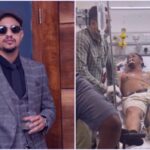 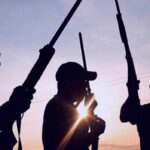