Iyorchia Ayu, national chairman of the Peoples Democratic Party (PDP) has described Atiku Abubakar as the right man for the position of president in 2023.

According to Ayu, Atiku possesses the needed quality and experience to unify Nigeria and attract the needed foreign direct investment to the country.

Addressing a large crowd of supporters of the party at the Ilorin, the Kwara state capital, Ayu noted that the PDP is on its way to victory.

He maintained that the PDP remains one united family regardless of the crisis rocking the party.

Ayu averred that the PDP is focused on rescuing this country and putting the country back on the path of development for every citizen.

“We are a party for all; we are not a party for only one part of the country. That is why we selected a unifier, somebody who will bring everybody on board and make sure that we rebuild this country,” Ayu said.

Meanwhile, Nyesom Wike, governor of Rivers state, has accused Ayu of corruption and misappropriation of funds.

According to Wike, Ayu embezzled a billion naira donated to the party by a presidential aspirant ahead of the party’s primary election.

Wike and four other PDP governors have been demanding Ayu’s resignation for the party to elect a national chairman from the southern region of the country. 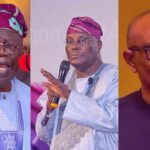