Wike made the allegation during a media chat in Port-Harcourt on Friday, October 14.

The governor, who had accused Ayu of corruption, said the PDP national chairman had received the sum of N100 million naira from a sitting governor and withdrew the same amount from the PDP account for the same purpose.

“If people know what we know, if we release what we have, Ayu’s children will go to him and say we are no longer your children,” Wike announced.

“Let Ayu say he did not collect N1 billion. In fact, let me also tell you, Ayu collected N100 million naira from a governor that he was going to renovate our democratic institution and then he (Ayu) went back to the PDP NWC and took the same N100 million naira for doing the same work.

“A leader must be a man of integrity.” You are presenting a man (Ayu) who lacked integrity as chairman of the party and somebody that wants to lead a campaign to take the reins of government?” Wike asked.

Meanwhile, Ayu had dismissed allegations levelled against him by the Rivers state governor.

The PDP national chairman advised Wike to desist from bringing his family members into their unending disagreement. 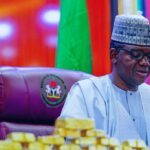 Davido splashes ₦20m on Chioma, says he is ready to go to jail for her