The entertainer was seen flaunting the new luxury ride on social media as he displayed the car for all to see.

In one of the photos spotted by News.ng, the singer sat in the red-and-black convertible, smiling and pointing his fingers at the camera.

Immediately after the news about the dancer’s new car hit the internet, Twitter media users congratulated him for acquiring his new whip.

Busayo said: “Osheeey Poco bought a mustang. Congratulations to him. Bet ehm is this Shelby up to 28 million?” 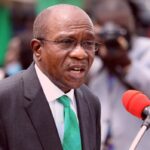 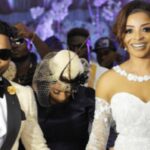