Davido and his girlfriend, Chioma, have continued to dominate the tabloids after rekindling their love.

The singer and his babe were recently seen taking a ride in his expensive Lamborghini urus worth over N300M.

In a video posted on Tooxclusive, the musician who was in the driver’s seat while his babe sat in the passenger’s seat got the attention of bystanders.

One man in the background referred to Davido as 001, while Chioma was tagged 002.

After a short conversation with the bystanders, Davido zoomed off to the cheers of onlookers.

Meanwhile, Davido seems to have fallen deeply in love with his girlfriend, Chioma.

The singer recently stated during an interview on Hot 97FM that he is ready to be jailed for his girlfriend to prove his love for her.

He said he also got her three Cartier bracelets, three bags and some other items, which amounted to $46,000. 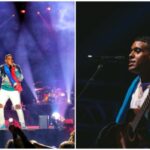