Nigerian singer Simi caused a funny scene when she swiftly reacted after a female fan hugged her husband, Adekunle Gold, in her presence.

The incident reportedly occurred shortly after Adekunle Gold performed at a concert in Lagos on Sunday, December 18.

Simi attended the show to cheer her husband. After his performance, his wife approached backstage to meet him.

But when she arrived backstage, she met a female fan who was hugging her husband. Simi reacted by politely telling the lady to back off, saying, “Sorry ma excuse.”

In another news, Nigerian singer Portable became the centre of attention in Ekiti state when he displayed charity by throwing money at some people.

As the incident unfolded, Portable shouted Wahala Wahala in response to the rush for the money.

“Tell the world I am back” – Davido declares
Next Article 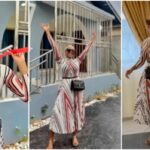