A Nigerian man became an instant millionaire after his stake in sports betting won him a whopping ₦38m.

The unnamed man was reported to have staked his bet on 18 games, which won him a huge amount of money.

Video of the incident showed people at the betting shop amazed after his ticket was shown on a computer screen.

On hearing the news, bystanders trooped to the betting centre to view his ticket while others shouted in excitement.

“Make I video the ticket, Jesus, 800 naira,” a lady was heard shouting.

After realising he had won, the man went to the mosque to offer prayers. However, he was accompanied by a large crowd who came to catch a glimpse of the latest millionaire in town.

Since the news emerged, Nigerians on social media have been congratulating the man for his win, while others have contemplated entering sports betting.

But a Twitter user, Chief Nomso, described betting as a trap.

“This is the trap of betting; make someone win 38 million to draw others who will pay them 98M in a week,” he warned. 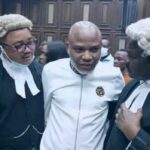 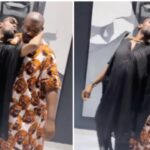