Nigerian actress Judy Austin Edochie has claimed that several people she does not know love her.

The second wife of Yul Edochie made the claim on her Instagram handle when appreciating her fans.

The actress said she also has deep love for her fans

“I just want to appreciate each and every one of you. It’s not easy being loved by so many people, even without knowing me personally. I love you guys unconditionally and I pray that the love of God will constantly be y’all companion Amen.”

However, some social media users used the opportunity to criticise her for marrying a man who already had a family.

“Competition full your body judy. If may post one beautiful picture like this gba! You go rush post your own. Nne you can’t compare yourself with that goddess o.”

“This one you just dey force love on us…Dont worry 10 years later you go tire ask stella Damascus and co.” 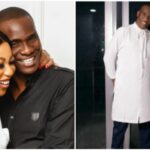