The All Progresses Congress (APC) has advised the minister of labour and employment, Chris Ngige, and other appointees of the federal government to either support the party’s presidential candidate, Bola Tinubu or resign their appointments.

The ruling party gave the directive after Ngige’s refusal to openly declare his support for Tinubu during an interview with ChannelsTV on Friday, October 7.

“Both of them [Tinubu and Peter Obi of the Labour Party] are my friends. My choice will be in the ballot box. It is a secret ballot. I shouldn’t tell Nigerians what I would do secretly,” Ngige said while responding to questions from the host on who he intends to support in the 2023 presidential election.

Ajaka maintained that all ministers and appointees of the federal government are mandated to support the APC presidential candidate and others seeking elective positions in 2023.

Ajaka said ”it is expected of a serving minister in an APC government to be a trusted apostle of Tinubu’s presidency in 2023, who along with other party leaders, laboured to ensure the enthronement of the same government in 2015 which they are now serving in,”

“Chief Ngige and other APC appointees, especially in the federal cabinet, should not forget in a hurry that they are holding onto the party’s mandate, hence, the need to protect it with whatever it requires.” But if they can no longer protect the interests of the APC in the public and that of our presidential candidate (Tinubu), I think the honourable thing to do is to step aside from the government formed by the APC,” the APC image maker added.

389 Policemen lost to Boko Haram since 2011 – Official
Next Article 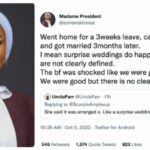