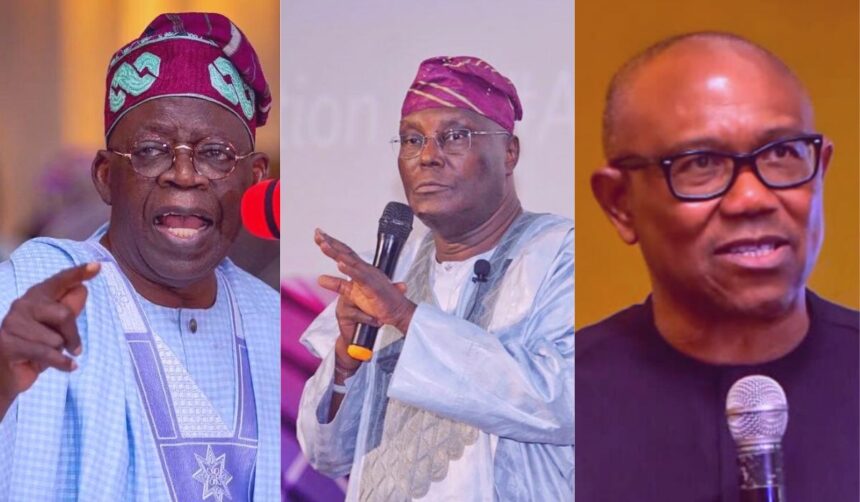 Bola Tinubu, the presidential candidate of the All Progressives Congress (APC), took a jibe at Atiku Abubakar and Peter Obi during his consultative visit to Gbaramatu Kingdom in Warri local government area of Delta state.

Atiku and Obi are top contenders in the race for who becomes Nigeria’s president in 2023.

While Atiku is vying for the position of president on the platform of the Peoples Democratic Party (PDP), Obi is running on Labour Party’s mandate.

Speaking after being conferred with the chieftaincy title of of “Iyelawei” (a very important person) of Gbaramatu Kingdom by the traditional ruler, Tinubu advised Atiku to ditch his presidential ambition.

“Your Royal Highness, as I stand before you, there are few of us left running.” One says he is Atiku. How many times has he been running? He’s always on the run, and he’s tired. Tell him to go and sit down; enough is enough,” Tinubu said amid cheers from the audience on Friday, November 25.

The APC flagbearer accused Obi of putting out false statistics to prove his points during public discourse.

“The other one [Obi], he think na statistic we go chop. He lies with arithmetic that no Indian can ever solve. To mention his name is a disgrace even to me. I won’t mention the name. Wrong arithmetic, wrong statistics, warehouse economics. That’s not what Nigeria needs,” Tinubu said.

Describing himself as the best man for the job, Tinubu promised to providing the area with a deep seaport, motorable roads, bridges and university if elected in 2023.