Obi, a former governor of Anambra state, has continued to enjoy overwhelming support from Nigerians, especially on social media.

However, some critics who linked Obi to the IPOB allege that his emergence has reduced the killings and attacks experienced in the eastern region of Nigeria in recent times.

“I sharply disagree that Peter Obi is in support of IPOB because I wouldn’t be with him today (if he is),” Baba-Ahmed declared.

The Kaduna politician further urged Nigerians to disregard allegations that Obi mistreated northerners while he was governor.

“They said Northerners were treated unfairly by being made to wear ID cards, before I decided to join Peter Obi’s ticket. Within weeks I did all the investigations I could. Mobile phones were already carrying cameras, I asked for and even offered some compensation ‘can I see just one picture of anybody who stood and said that while Peter Obi was governor in Anambra State, he made me to wear this?’ and there was none.

“And I should sit down and believe reckless people who just talk anyhow because you’ve come out in politics when I know the kind of politics that we play,” he asked.

Baba-Ahmed maintained that he had carried out his due diligence before accepting to be Obi’s running mate for the 2023 presidential election.

Why we want Buhari impeached – APC Senator
Next Article 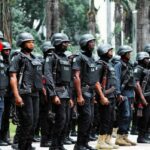