A businessman who won N72,700,000 at a Green Lotto has instituted legal action against the company and its agent, Charles Akhenanen, for refusing to pay him the money he won.

“When I got there on Tuesday to claim the money, they said their system developed a fault and the result had wiped out,” he said.

“I asked Charles, was it after the game declared the winner the machine developed a fault or before, but the defendant chased me out and I had no option than to report to the police.”

The businessman, who has been playing games for over 30 years, disclosed that the company offered him N20m, but he insisted on getting the N72m he won.

However, the agent and Green Lotto, who are facing charges of the alleged stealing of N72,700,000, have pleaded not guilty to the charges.

The trial judge, Justice Nicol-Clay, has adjourned the matter for a further hearing on November 21. 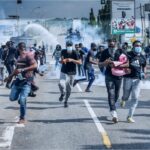 Police: Why EndSARS Protesters Were Teargassed
Next Article

Davido acknowledges fan who tattooed 30BG logo on his forehead