A Bauchi state senator elected on the platform of the All Progressives Congress (APC), Adamu Bulkachuwa, has said that most lawmakers in the red chamber are united in the decision to impeach President Muhammadu Buhari.

Bulkachuwa noted that the move was necessitated by worsening Nigeria’s economic and security situation.

“When we realised that all that have not actually worked, the security situation was getting worse and even the financial situation in the country is not improving, we thought we are just one arm of the government and we are limited in the execution of proposals and the actual enforcement of suggestions and laws; we are not responsible for all that,” he said.

“What we can do is try to draw the attention of the Executive (of the government) that we have tried everything and the only thing we have not tried is that we have to draw your attention to the fact that we have a constitutional responsibility to pull your ears at it were by way of notice of impeachment and give you a chance,” he added.

Recall that some lawmakers elected on the platform of the Peoples Democratic Party (PDP) had called for President Buhari’s impeachment over the spate of insecurity in the country.

The move, which led to a rowdy session in the Senate, has continued to gain the support of lawmakers elected on the All Progressives Congress (APC) platform. 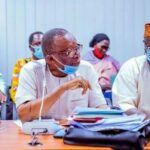