Nyesom Wike, governor of Rivers state, says Iyorchia Ayu is too corrupt to lead the campaign train of the Peoples Democratic Party (PDP) across states for the 2023 elections. Ayu is the national chairman of the PDP.

Wike had spearheaded the removal of Prince Uche Secondus to pave way for Ayu, A PDP chieftain from Benue state in Nigeria’s north-central region.

Things, however, took a dramatic turn when Wike lost the PDP presidential ticket to Atiku Abubakar.

Wike and four other PDP governors have been demanding Ayu’s resignation in exchange for their support for Atiku ahead of the keenly contested 2023 presidential election.

The Rivers state governor had accused Ayu of corruption adding that the PDP chairman failed to deposit funds meant for the party.

“Nobody will listen to a campaign led by a corrupt man. Ayu is corrupt,” Wike declared at the flag off of the PDP campaign in the state on Saturday, November 29.

“Rivers people are hurt. Ayu, you are fighting corruption, how do you fight corruption? I said you took N1bn. I told you, you took the money we realised from the primaries. Ayu sue me!

“You cannot fight Rivers state and go free. Ayu, you cannot lead me or Rivers state to any campaign, because, you are very corrupt,” the governor said. 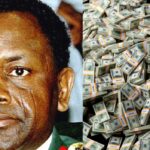 Abacha Loot: Buhari’s govt gets over $20m from US
Next Article

Tinubu: Insults on social media give me high BP