Nigerian singer, Ahmedu Obiabo, popularly known as Blackface, has alleged that Asake has stolen a song of his.

The former member of PlantashunBoiz made the allegation in a tweet after video director TG Omori disclosed that Asake’s Joha video costs $165,000.

READ ALSO: Jubilation as Olamide performs on stage with Asake

In response, Blackface slammed TG Omori and Asake for not seeking approval before remixing his song.

“You spend $165k dollars to shoot musical video for your artist Una no fit use 100naira call the owner of the song before una remix am Una dey form say una smart I believe E better make una do the right thing because this one I no go sorry for una ! I dey come.”

The singer said no one has the right to sample, remake or remix works without proper permission

He accused Asake and TG Omori of sabotaging him by stealing his work.

Still on entertainment, a recent video of Asake and British singer Stefflon Don partying at a club in Ghana has generated huge reactions from social media users.

Stefflon Don and the Grammy Award-winning singer, Burna Boy, had dated until they parted ways in 2021.

However, the recent clip showing her having a cozy time with Asake has fuelled speculations about a romantic affair between the two. 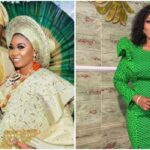 “My marriage is over”- Actress Wumi Toriola declares
Next Article