An unapologetic Nigerian lady who was caught cheating on her boyfriend has justified her actions, saying her boyfriend gives her just 50k a month to take care of herself.

The lady made the claims in a video that has now gone viral on social media. Footage in the clip showed a man who appeared to be the girl’s boyfriend being restrained by two other men.

The man seemed to be angry that his lover was unfaithful to him. However, the lady who was standing on the other side of the room was heard justifying her infidelity because she was paid 200k for a guy for one night.

She said the 200k she got from the guy for one night was far above the 50k her boyfriend gives her monthly.

“Why will you be shouting at me, I don’t understand.  this guy is giving me 200k for just one night, and you give me 50k in a month, do you know how much I make my hair?”

Her boyfriend became infuriated by her response and was taken out of the room before matters could escalate. 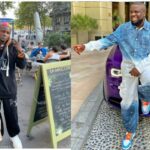 My money is legit, not like Hushpuppi: Portable boasts at expensive clothing store abroad