Nigerian musician Portable has renewed his beef with Small Doctor after he accused the latter of envying his glory.

It is understood that the audience loyal to the Agege fuji pop musician considered his remark as a disrespect to the region.

In response to what occurred at the concert, Portable blamed Small Doctor in a video via his Instagram handle for the fans’ unruly behaviour.

He threatened to deal with Small Doctor wherever he meets the musician.

In another news, Portable became the centre of attention in Ekiti state when he displayed charity by throwing money at some people. 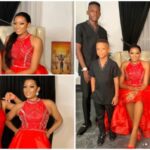