Nigerian disc jockey DJ Cuppy is enjoying romantic moments with her fiancé, Ryan Taylor, who recently proposed to her.

The daughter of famous billionaire, Femi Otedola, said there is nothing better than being in love with your best friend.

Cuppy recently shared a clip showing her and her fiancé jumping into a pool with their clothes on.

She stated that the moments she’s having with her man are great because she has never been this happy in a long while.

The DJ described the connection between her and Ryan Taylor as soulmates.

“Soulmates are two people who bumped into one another and said, “There you are!

In another news, Nigerians were surprised when disc jockey, DJ Cuppy, took her love for the colour pink to the next level by preparing pink rice. 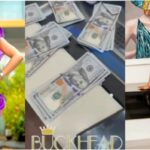 BBNaija star Mercy Eke flaunts dollar bills as she goes shopping in the U.S.
Next Article 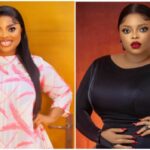