Leader of the Yoruba socio-cultural association, Afenifere, Pa Ayo Adebanjo, says the current National Assembly is a beneficiary of a fraudulent constitution.

Adebanjo stated this while reacting to calls for a new constitution for the Federal Republic of Nigeria by Afe Babalola and others.

The Afenifere leader noted that the present crop of lawmakers lacks the capacity to give Nigeria a new constitution.

Meanwhile, Afenifere has declared their support for the presidential candidate of the Labour Party, Peter Obi. 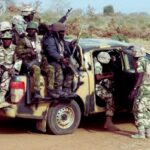 ‘Tinubu not aware his workout video is online’ – Umahi