Heidi Korth, the estranged wife of singer, Sina Rambo has disclosed that some men have started sending her love messages on social media.

The Nigerian-German who has been embroiled in marital issues with her husband made the claim in a post via her Instagram story.

She disclosed that her admirers obtained her phone numbers from her business page.

“It’s weird and creepy to go to my business page to get my number and send me love messages. Please less us respect each other. Business only!! Thank you.”

In another news, Queen Ojanga Korth, the mother-in-law of Sina Rambo, has accused musician, Davido of threatening her daughter, Heidi.

“You stole my song” – Singer Blackface challenges Asake
Next Article 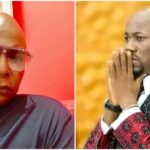 “I dreamt that some women attacked you:” Charly Boy forewarns Apostle Suleman